Today marks the 80th anniversary of Mussolini's invasion of Greece. On October 28, 1940, the Italian Army invaded Greece after the Greek Prime Minister Ioannis Metaxas had rejected an Italian ultimatum on the cession of territory. The day is remembered in Greece as Ohi Day, the 'Anniversary of the No' inspired by Metaxas's famously laconic (and likely apocryphal) response to the Italian ultimatum: "no".

Under Mussolini, Italy had been pursuing policies of imperial expansion for several years. One of the bloodiest and best known examples of Italian imperial adventure was the war in Ethiopia, when the Italian Army invaded and eventually conquered Ethiopia, creating the colony of Italian East Africa. Condemned by cartoonists from London to Istanbul, Mussolini's face was becoming known to the world's newspaper readers as that of a ruthless conqueror. In the below, David Low of London's Evening Standard depicts a howling Mussolini clasping poison bombs before Ethiopian corpses. And here below, the cover of a 1936 issue of the Turkish Akbaba magazine, published just after the Italo-Ethiopian War, shows Mussolini wearing a laurel and holding a fasces with Ethiopian caricatures bound inside. 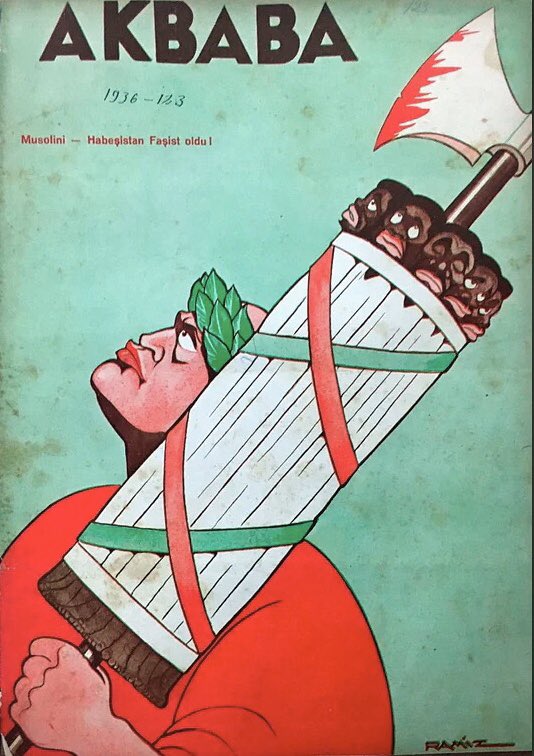 By 1940, having formally entered the war on the Axis side, Mussolini believed Italy to be amply equipped to prosecute a war of expansion in the Balkans. In April 1939 Mussolini had invaded and subsequently annexed Albania, which became an Italian protectorate (later, the Italian invasion of Greece was to be launched from Albania). As with Ethiopia, Italy's first foray into the Balkans drew the world's condemnation. In the Soviet cartoon below by the Kukryniksy trio, a snakelike Italy prepares to strike the rabbit of Albania. 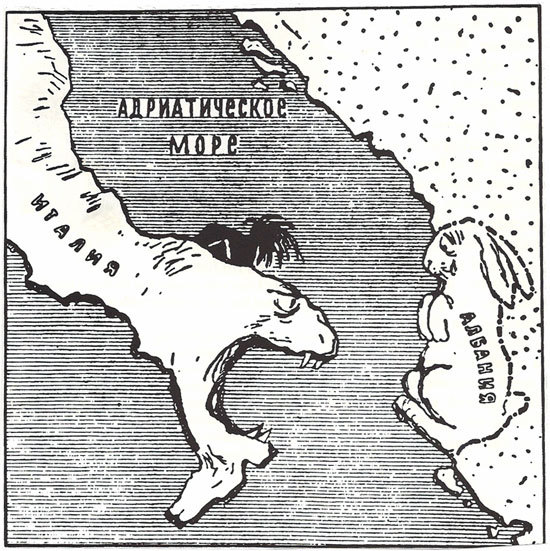 At the time of the Italian invasion Greece was being governed by the so-called 4th of August Regime, led by Ioannis Metaxas. The regime, though somewhat modelled on Italian fascism, remained close to Britain, which would come to Greece's aid in 1940 after some initial hesitation (Britain had spurned an earlier offer of alliance from Metaxas). Greece began to grow closer to Britain in early 1940, by which time the Second World War was underway, and so a short-lived friendly period between Italy and Greece met an abrupt end. After having his rather vague ultimatum rejected by Metaxas (not "ohi" but the near-equally terse "Alors, c'est la guerre"), Mussolini's troops invaded Greece.

The war would last just under six months and saw one of the most intense and fruitful flurries of (largely impromptu) propaganda production during the Second World War. Newspapers and publishing houses published thousands of postcards and cartoons from the very earliest days of the invasion up until the Axis occupation of April 1941, the bulk of them ridiculing Mussolini personally. Mussolini was, as mentioned, a figure already familiar with the international audience, largely for imperial exploits in Africa and Albania. In the below, Mussolini is pictured variously as a foolhardy Goliath, a coward and a hapless buffoon. 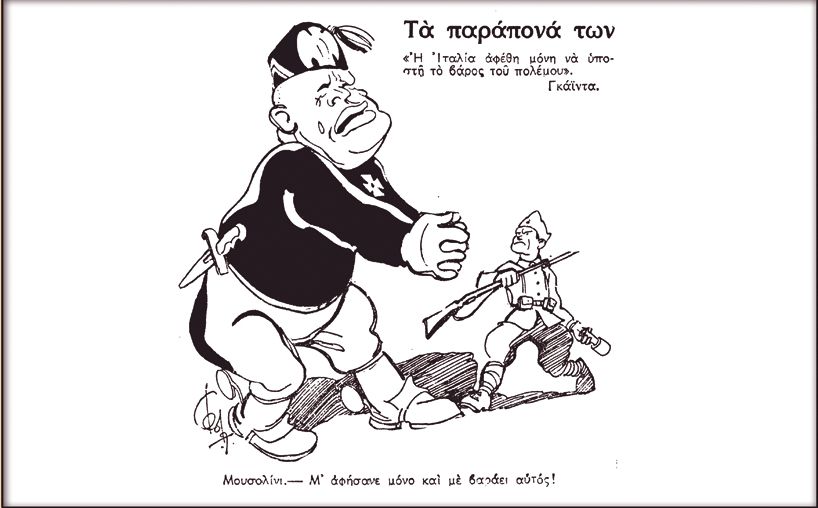 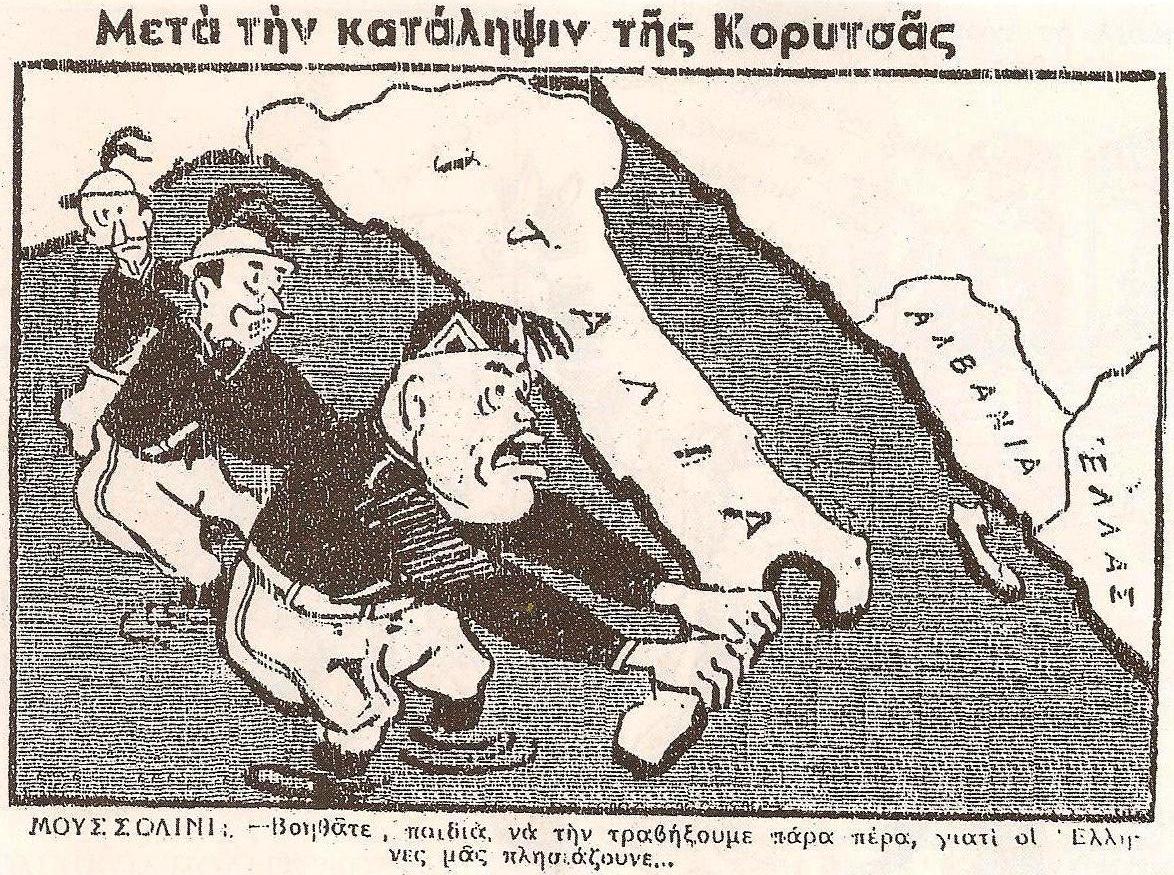 Much of the more 'formal' propaganda – especially patriotic postcards – were published in English as well as in Greek, ostensibly to appeal to an international audience but also in recognition of the British, especially the Royal Air Force's, contribution to the war effort. In the example below, captioned "Naughty Boy!", British and Greek soldiers carry off Mussolini like a schoolboy by his ears. The soldier on the right is a Greek Evzone (a member of the Greek Army’s mountain units) and on the left a British RAF soldier. 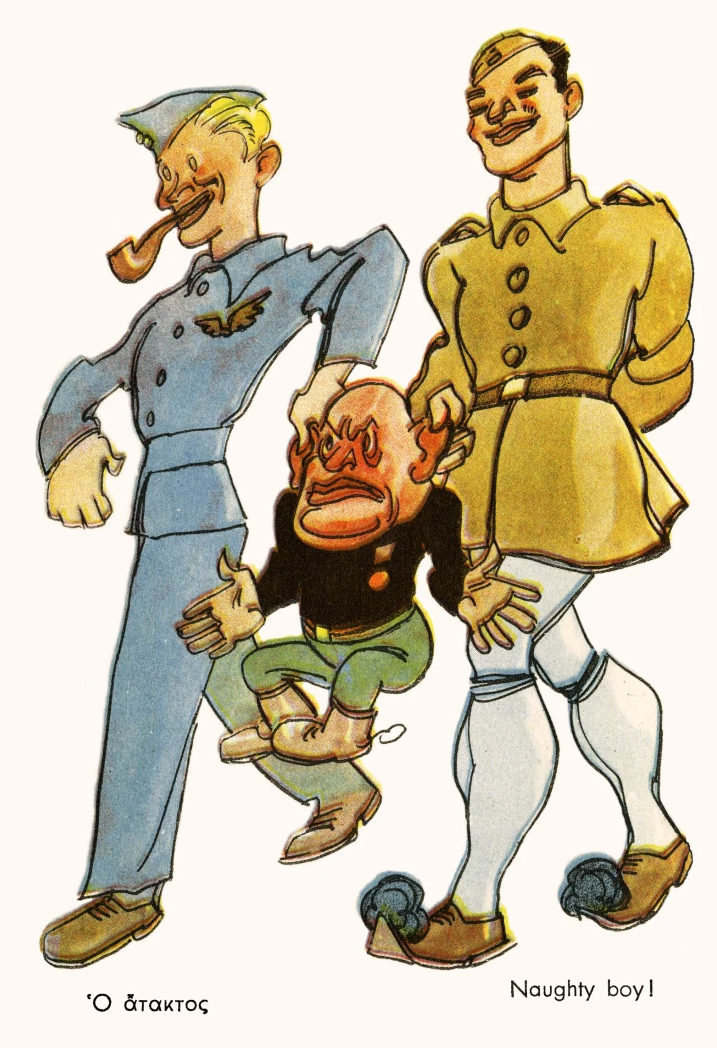 The war also captured the attention of the international media. In the below examples Mussolini is depicted as a coward fleeing Greece upon the slightest resistance. The top, published in the American Richmond Daily News, shows Mussolini (helpfully labelled 'Benito Mussolini' by the artist) bolting it back to Italy, with a Greek soldier at the rear bayonetting his behind. In the one below, drawn by David Low of London's Evening Standard, Mussolini dressed in the armour of a Roman soldier cowers before a much smaller Greece. The caption is: "Help! Here's one showing fight." 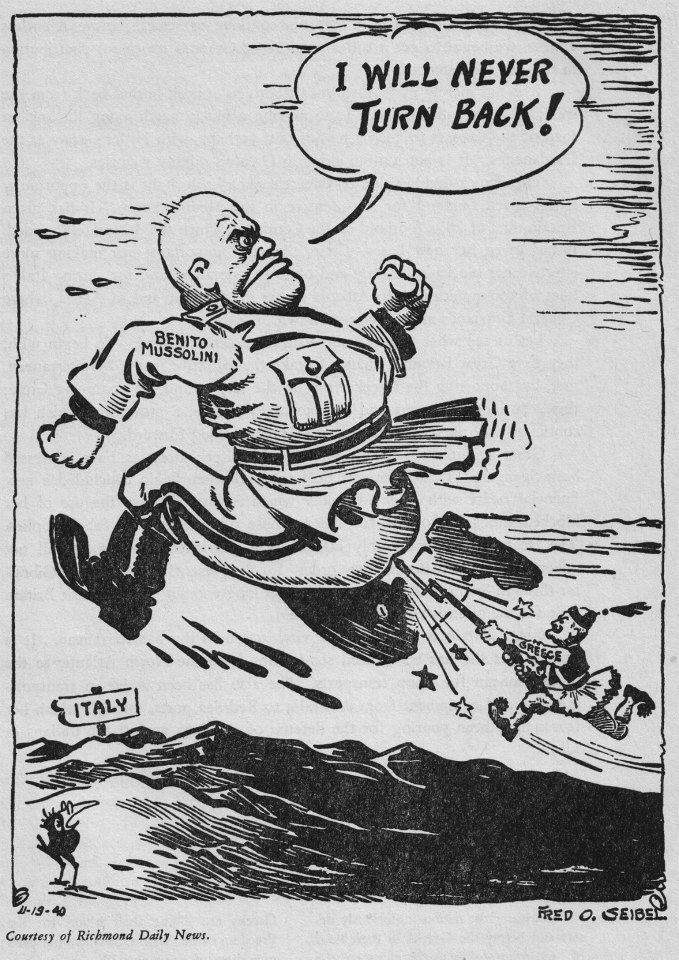 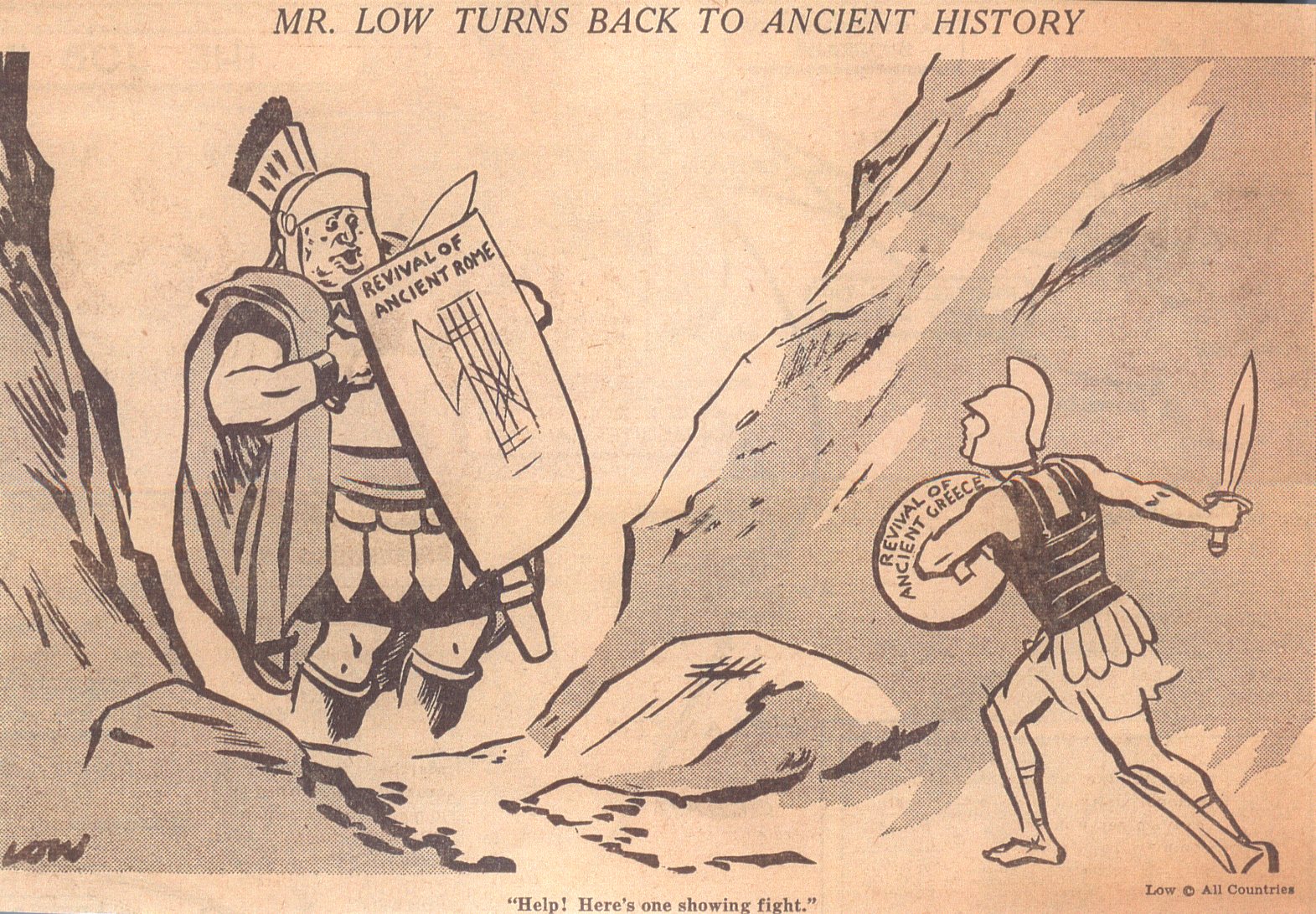 I'll be updating this blog post over the next few days when I have a bit more time, as well as adding further parts to what I hope will become quite a long series. As I said, there's a ton of stuff from the war and I'm hoping to create a little library of it all here if I can.